Having issues checking out? Use the form below and I'll get right back to you!

In celebration of Thrawn being reintroduced to the Star Wars canon, I’ve created seven art pieces, each depicting the Admiral in a unique style from art history. 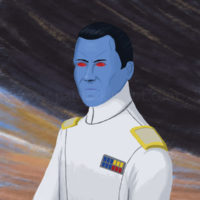 Popular in early 19th-century Europe, Romanticism was an art movement that celebrated the individual and the past, most commonly the art and culture of the medieval era. It often depicted scenes of intense emotion and awe as a response to the logical and more grounded aesthetics that came with the Industrial Revolution. Romanticism promoted the idea of raising up a heroic individual, believing that by raising up heroes, society was made better for it. 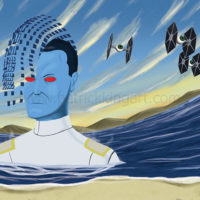 Beginning in the early 1920s, surrealism aimed to bridge the gap between dream and reality. Surrealist artists depicted bizarre, dream imagery in fine, realistic detail, often to an unnerving degree. A progression of the dadaist movement, which sought to express the idea of chaos and randomness, surrealism often used visual non sequitur and unexpected imagery as a way to further depict the bizarre and often nonsensical images in dreams.

Originating in France and most popular between 1890 and 1910, art nouveau was an art movement inspired by natural structures and patterns, such as that of plants and flowers. Classified as a “total” art style, art nouveau included every medium from painting to graphic design to architecture to metalwork, with the idea that art should be a way of life. The example here uses a heavily-graphic design influenced style as popularized by artists such as Alphonse Mucha and Jan Toorop. 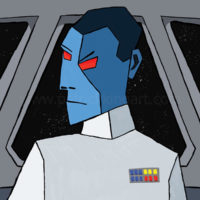 Popular from the early 1900s until the 1920s, cubism is widely considered to be the most influential art movement of the 20th century. Made most famous by Spanish artist Pablo Picasso, as well as French artist Georges Braque, cubism deconstructed objects and reassembled them in a new abstract form, often depicting the same object from multiple angles simultaneously. 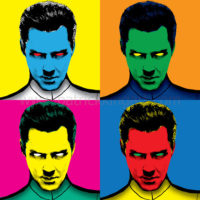 Beginning in the late 1950s in England and the United States, pop art was an art movement that challenged the traditions and norms of fine art by including imagery from pop culture and found objects, often removed from context and presented on their own. Heavy use of irony, parody, and satire was a direct reaction to the intensely personal interpretations used in abstract expessionism. Artists such as Roy Lichtenstein, Andy Warhol, and Jasper Johns made use of commercial art, comic book art, and stenciling, but removed from their typical context in order to present them as their own unique art objects. 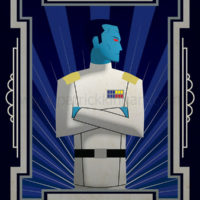 Originating in France just prior to the outbreak of World War I, art deco combined numerous styles and genres such as cubism, fauvism, the craftsmanship and aesthetics of 1840s France, and various styles from South America, East Asia, Ancient Egypt, and the Middle East. The style was defined by its exquisite craftsmanship and fine detail, with fine lines and blocky, geometric figures creating a very sleek, modern appearance. 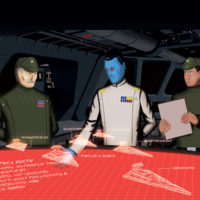 Beginning in central Italy around 1600, the baroque art movement emphasized drama, grandeur, tension, and exuberance. Often featuring an emphasis on narrative and character, the baroque movement was very straightforward, often eschewing the mystical or more ambiguous elements of the classical styles preceding it. Most notably, artists such as Caravaggio and Artemisia Gentileschi featured dramatic scenes with harsh lighting, graphic imagery (such as Gentileschi’s famous Judith Beheading Holofernes) and heavy use of shadowing.